Origin Of The Ridgeways (Ridgway) Of Greene County Alabama

Good Day Everyone. My name is Steve Handy. I love genealogy and in these times, it's a much embraced hobby. One of the reasons for it's popularity has to do with the emerging technology that complements genealogy. One emerging technology that complements genealogy are the advancements in DNA Technology. This is one of the reasons for which prompted me to create this post. Here I would like to share news of a great breakthrough discovery I recently made in my family tree. What was the big discovery? Let's find out!!!!!

My maternal grandmother was Odessa Ridgeway (1922-1985). Shown to the right was her father - John Hoss Ridgeway Sr whom was born in Eutaw, Alabama. If you notice - my maternal grandmother's last name was Ridgeway. Believe it or not, the actual spelling of Ridgeway should be "Ridgway" from what I was told. Well it's been confirmed that indeed the spelling of the word Ridgeway is without the "e" as we will see. When I began my journey into the past of the Ridgeway origins - my journey lead me back to the southern state of Alabama.


After doing some extensive digging via concrete paper trails - it turns out that my earliest Ridgeway ancestors were Isham Ridgeway Sr and Martha Childs (Childs or Chiles) of Greene County, Alabama. Shown toward your right is the 1880 census and listing of my first known Ridgeway ancestors. There are two things to notice. First, notice that Isham Ridgway Sr has his last name spelled as "Ridgway" without the letter "e". Second, notice that Isham Ridgeway Sr's ethnicity is specified as "mulatto". Those two observations were actually a starting point on about a two year journey of paper trails, DNA data, patience and hunting which finally produced much success.


Let's now take a look at that success!!!

Having been involved with DNA Genealogy since 2011, I have learned a few things based on socio-cultural patterns which have traditionally have produced much success in both genealogy and history. For example, when the term "mulatto" is used within census data, from a social perspective, (not a scientific perspective), it usually means a few things:
Going on the three points mentioned above, the hypothesis that I was working with was that Isham Ridgeway Sr was likely fathered by a slave owner in the area with the last name of Ridgway.

It was in 1821 that Rezin Ridgway migrated to Greene County, Alabama and presumably brought his five sons and his slave plantation with him as well. (In fact - his son Bradley Ridgway was a commissioner in Boligee Alabama which is a town of about 500 people). So is Rezin Ridgway an ancestor to Isham Ridgway Sr and the line of Ridgways I am descended from?

The DNAMatches blog is mostly about the science behind DNA Genealogy. In this post however, I am going to give a quickie science reintroduction about two DNA tests: the Autosomal and Y-DNA tests. Then we will return to our discussion above about the Ridgway family lineage.

To date - I have DNA tested nearly 15 people in my family. Take a look at the picture shown toward your right. (You can click this picture to make it bigger) Shown toward your right is the DNA results of my mother's aunt - Marianne Ridgeway. The people listed are a few of Marianne's matches. The column that states "shared cM" is the centiMorgan which is the amount of shared DNA between any two people. For example, notice that Marianne Ridgeway and her nephew, Richard Mitchell, share 962cMs of DNA. This 962cM of DNA was inherited from John Hoss Ridgeway Sr. John Sr is the shared common ancestor between Marianne and her nephew Richard.

When you take a DNA test, you constantly get new matches that can appear at anytime. Each "match" is a person you share DNA with, which essentially is a new relative. You can get a new match tomorrow, next week, etc. Take at look on the left at a new match that came in recently for Marianne Ridgeway. The new match is Ms Donna Ruth Van Horn. Ms Van Horn is a descendant of Rezin Ridgeway (1789-1866).

When the new match of Ms Van Horn came in, I have to admit that I got excited!!!! The initial thought that came into my head was that Rezin Ridgway was indeed an ancestor to my Ridgeway line. However, not so fast Sally!!!! (A joke hahaha). It's entirely possible that Marianne and Donna share an entirely different ancestor other than Rezin Ridgway. This can and does happen in DNA Genealogy. We simply need some more evidence. And sure enough more evidence came in!!!!

Shown toward your right is a 2nd new match of Marianne Ridgeway that came in a week later. The match is a Mr Walter Randy Ridgway. Mr Randy Ridgway is a first cousin of Ms Donna Van Horn.


As a bonus piece of evidence, my grand aunt Marianne Ridgeway also matched to the mother of Ms Donna Van Horn - Ms Elizabeth Moore as shown below.


Not only do Ms Donna Van Horn and Mr Randy Ridgway match Marianne Ridgeway, but both match the other Ridgeway members of my family as well. See the photos below from Gedmatch.

Here is a match between Donna Van Horn and my grand uncle - John W. Ridgeway Jr shown below


With this new autosomal DNA evidence in hand, it's a fairly strong case to make that Rezin Ridgway is indeed an ancestor to me and my Ridgeway relatives. However the DNA evidence that sealed the deal was the Y-DNA evidence which we will look at next.

In my family - I have performed a Y-DNA test from Family Tree DNA on two of my Ridgeway relatives:

Here are the respective Y-DNA paths for each John and Leroy shown below:
Going by the above paths - we can predict that both John and Leroy should have the same Y-DNA and should match. This of course is true. Take a look at the below photo showing the Y-DNA results of both Leroy and John Jr Ridgeway. For now, focus on the numbers starting at 13. I will explain what these numbers mean shortly. However notice, not surprisingly, that John and Leroy both match. Match meaning they have the same numbers.

The matching of Y-DNAs between both Leroy and John Ridgeway Jr is to be expected since they both inherited the same Y-DNA from their grandfather - Isom Ridgeway Jr.

The next key question is this:
How can we determine if the Y-DNA of Rezin Ridgway will or will not match the Y-DNA's of either Leroy or John W Ridgeway Jr? The answer is that we would need a known male descendant of Rezin Ridgway whom is descended from Rezin Ridgway via an unbroken chain of males.


DNA EVIDENCE PART 3: Y-DNA Results
I met Mr Walter Randy Ridgway within the month of March 2016. Since then it has been a pleasure. Before meeting Mr Walter Ridgway, there was no known Y-DNA data on file from a male descendant of Rezin Ridgway. Here is the paternal line of descent from Rezin Ridgway to Mr Randy Ridgway.

If you click the above picture of my Y-DNA results shown above, you will see a set of numbers 15, 21, 17, etc. These numbers are repeats of a specific DNA sequence. The specific DNA sequence is given a name such as DYS393. For example, DYS393=15 means a DNA sequence is repeated 15 times. When two or more men have the same number of repeats across multiple DNA sequences (DYS393, DYS390,etc), those men are considered a "match".

As you can see in the above photo, both Leroy and John Ridgeway Jr match to Randy Ridgway!!!!!! In other words, all three men (Leroy, John, and Randy) all inherited their Y-DNA from the same male ancestor who clearly is Rezin Ridgway when considering all available evidence in this case.

Now it should be mentioned that a family of brothers with the same father will all have the same Y-DNA. This begs the question: Could it be that one of Rezin's brothers, (Yes Rezin had brothers), produced the line of Ridgways I am descended from? Or another fair question to ask is this -> Did Rezin Ridgway or one of his sons actually father Isham Ridgeway Sr around 1840?

Checking ALL The Evidence

We have arrived at the final part of the post. This part is entitled - "Checking All The Evidence". At this point, it's pretty clear that either Rezin Ridgway or another male ancestor on his paternal side is an ancestor to my Ridgeway family. That's the conclusion that can be drawn from the Y-DNA evidence alone and nothing else.

But let's check and make sure that Rezin Ridgway is indeed the ancestor, (which he clearly is), when considering all the evidence. Although the evidence at this point is fairly definitive, there are some questions on the table which need addressing. Let take a look at some these questions.

Could A Brother Of Rezin Ridgway Be The Ancestor?

This is a fair question to ask. The main reason for this is that any two or more full brothers will all have the same Y-DNA they inherited from their father. In other words, given Y-DNA photo shown above, how do we know that the Y-DNA sequence as shown isn't from a brother of Rezin Ridgway?

To answer this question we have to look at secondary forms of evidence. Rezin Ridgway had three brothers born in Virginia:

A second more definitive piece of evidence actually comes from the 1900 census record. In this record shown toward your right, we see my ancestor - Isom Ridgway Sr with his children and grandchildren. (Please note that the spelling of the last name of Ridgway is incorrect) If you look in the census, it is specified, in yellow, that Isom Sr's father was born in Kentucky!!!!! Now remember that all of Rezin Ridgway's sons were born in Clark County, Kentucky as well. No brother of Rezin was born in Kentucky. So this document is in agreement with the idea that Rezin Ridgway, more specifically one of his sons, fathered Isom Sr.


A third indirect piece of evidence comes from some more autosomal DNA data. If you remember, Rezin Ridgway produced five sons in Clark County, KY. The woman whom Rezin Ridgway had these sons with was Mary Halley (1790-1842). If a son of Rezin Ridgway and Mary Halley fathered Isom Ridgeway Sr, then it stands to reason that a descendant should contain DNA segments from Mary Halley as well!!! Indeed this appears to be the case.

It turns out that some of my Ridgeway relatives, including myself, have DNA matches to people who are known descendants of James Halley (1707-1792) and Elizabeth Simpson (1717-1785). Both James and Elizabeth Halley were the grandparents of Mary Halley. 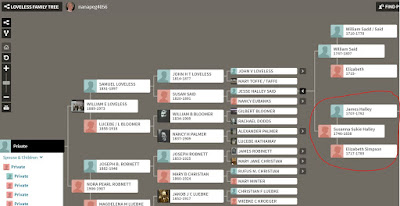 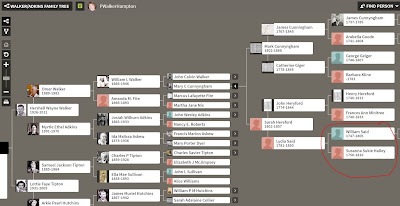 The fact that me and my Ridgeway relatives are all matching DNA with individuals who are known descendants of James Halley (1707-1792) and Elizabeth Simpson (1717-1785) is not a coincidence. Therefore considering ALL the available evidence, it's pretty clear that a son of Rezin Ridgway did father Isom Ridgeway Sr back around 1840 in Greene County, Alabama. The question now is which son???

Now let's see if we can answer that question.

This is actually an open question which yet has to be answered. The answer to this question is that it's unknown which son fathered Isom Sr. What is known is that Rezin Ridgway's son, Bradley Ridgway, actually inherited many of the slaves from his father. Bradley Ridgway was also the commissioner of Boligee, Alabama which is a small town in Greene County, Alabama. Isom Sr and his family lived in Boligee, Alabama around 1900.

Well that's it!!!!! After two years of constant dedication to research, a brick wall has been knocked down and an extension of the Ridgeway family has occurred!!!!! I look forward to meeting my new Ridgeway (Oh excuse me - its spelled "Ridgway") cousins!!!!
Posted by DNAMatches at 12:03 PM 9 comments: