Good Day Everyone. How is everyone doing doing?  In this document, I am going to provide an introduction to Autosomal DNA Testing. By far, out of the three basic DNA genealogical tests, an autosomal DNA test is the most popular. The purpose of this document, is to provide a clear and easy understanding of an autosomal DNA test. Before taking autosomal DNA test, one should understand the nature of DNA. Your DNA is you. It doesn't change. You can change your name, address, and etc. With DNA, that's not the case. Your DNA will tell on you. In other words, an autosomal DNA will reveal the truth. For some people, that could be good. For other people, that could place a person in positions that may not be comfortable. Secrets, which could be damaging, may inadvertently get revealed. In an age where it's simple to send off a DNA sample, and get results back quickly, it's important to understand. So please keep that in mind with a test of this nature.

Science and Autosomal DNA Test Basics
An autosomal DNA test is a DNA test that is designed to discover and identify relatives and ancestors that are or were living within a genealogical time period. By genealogical, we mean within the last 100 to 300 years. The reason the test can only go back that far has to do with a natural process called recombination. (Recombination will be explained in a separate document). There are three basic autosomal DNA tests on the market. The first is Family Finder which is managed by Family Tree DNA. The second is called DNA Relatives (previously called Relative Finder) which is managed by 23andME. The third is called AncestryDNA which is managed by Ancestry.com.

DNA is composed of four bases called A, T, C, and G. A basic DNA segment would be something like this -> "CATG".  Now suppose a DNA sequence changes from CATG -> CATA. In this case, a base "G" changed to a base "A". This can happen if DNA copies itself and a mistake occurs. The base A is what is referred to as a SNP. SNPs are the foundation of an autosomal DNA test.


Methodology
An autosomal DNA test works by identifying a consecutive number of shared and linked SNPs that lay in a row on any of the 44 chromosomes. SNPs are powerful. They are used because they change very very slowly over time. In other words, when you inherit your DNA from each of your parents, the SNPs generally are passed to you unchanged. Because of this slow change, when you and another person both share a number of SNPs on the same chromosome, then that DNA segment must of been inherited from a single source, a common ancestor.

Because each of us has two parents, we each receive a single SNP from our mother and father like this -> AT. This single pair of two SNPs are generally associated with an number called a Reference SNP ID. For example rs1234 -> AT. The "rs1234" is the reference SNP ID. Now remember that of the 44 autosome chromosomes you have, you get 22 chromosomes from your mother and 22 chromosomes from your father. Each chromosome you inherit from each parent actually sits as a pair with a SNP sitting at the same position and location on each of the chromosomes in the pair. You can see like this below.

Let put this is in a table to make it easier to see.

In this example, basically the child has inherited its chromosome 1 from its mom and chromosome 2 from its father. Remember that the child's parents also have two SNPs as well. Mom and Dad each inherited a SNP from their respective parents.

Now let's look a number of SNPs on each of the chromosomes.

This basically means chromosome 1 of the child has SNPs -> "ATCTG".

By the same token, from the father, chromosome 2 of the child has SNPs -> "TCCAC".

The child has received five SNPs from mom and five SNPs from dad. Our total is 10 SNPs from both parents. Tests like Family Finder or Relative Finder work with tables like this shown above.

Alice Smith has on her chromosome 1, the same sequence of SNPs -> "ATCTG".


Remember that the child inherited a total of 10 SNPs from both parents. Alice matched to 5 out of the 10. Alice matched to half the total SNPs which came from the mother's side. Because of this, an autosomal DNA test is also called a Half Inherited By Descent (HIBD) or IBD test. This makes sense because a match (ignoring certain expections) is going to be related to you on only one side of your family. This means a match is going to have the same SNPs that either your mother or father passed to you. That usually means half.

In addition, it was mentioned in the above example, that the child inherited its chromosome 1 from its mother and chromosome 2 from its respective father. In reality, an autosomal DNA test doesn't know which chromosome or SNP came from which parent. It has no way of knowing. To the test, the only knowledge it can have is when to or more people have a number of "matching" SNPs. In order to know, you must test a parent, grandparent, or a close relative. If that ancestor or close relative, matches as well, then you know which side of the family your match is on.

Also, we saw in the simple example, that Alice matched to 5 simple SNPs to the child. In reality, tests like Family Finder will declare a match if there are in the range of 500 to 700 SNPs that a person has in common with another person. Of course there are other factors such DNA segment length, noise, and other factors that an autosomal DNA test must consider as well. To make things easy, companies like FTDNA or 23andME will lump sum the numerous factors, into a unit of measurement known as the centiMorgan.


CentiMorgan (cM)
If there is anything to take from this document, then the centiMorgan is something you may want to focus on. Now the exact definition of the centiMorgan can be a little tricky and hard to understand. It requires knowing about recombination and that's for another discussion. To make things easy to understand for everyone, let's look at the centiMorgan as a unit of measurement that represents DNA segment length, number of SNPs, and etc, all rolled into one. The centiMorgan basically gives us a way to compare apples to apples or oranges to oranges.

Based on current evidence and thinking, anything considered above 20cM is definitive evidence of common ancestry within a genealogical time frame. In other words, if you share at least 21cM with a person, then you are related to that person within a genealogical time frame. At FTDNA, the Family Finder test only reports matchings above the 20cM level. Between 20cM and 10cM is considered probable evidence of common ancestry. 23andMe's Relative Finder appears to report above 7cM.

A good way to confirm if someone is related to you is to test multiple family members. This way you can know if low cM amounts such 11cm or 7cM indicate a shared common ancestor.

Since we all have four grandparents, we share 25% of DNA with a single grandparent. As an example, my paternal grandmother Juliette Turner shares 1763.32cM with myself. If we do the math -> 1763.32/6740.46 = 26.16%. These numbers are fairly consistent. Here is an unofficial chart with all the cM listings. 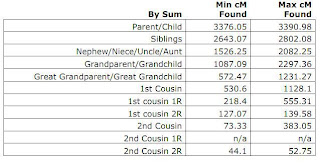 It should also be mentioned that the centiMorgan numbers shown in this chart, starting at siblings down to cousin, represent FULL relatives. Full relatives share two of the same ancestors. Half relatives share a single parent, grandparent, ancestor etc. This means that half relatives share half the amount of DNA that full relatives would share. This means that you would essentially take the cM numbers listed above and slice them in half. For example, you and your aunt should share roughly around 1600cM to 1900cM of DNA. If it's discovered that you actually share say 700cM with your aunt, then your aunt is actually a half relative. This would mean your parent and your aunt are half siblings, only sharing one (not both) of their parents.

Identity By State (What a coincidence!!!)
It's pretty clear that when two or more people share a significant amount of DNA, a relationship is revealed. That's the basic principal in all DNA tests. However reality is not always clear cut as that!!  Within a population of people, two or more people may share amounts of DNA due to mere coincidence and chance. At very low levels of DNA (1cM for example), two or more people may randomly share DNA. Sometimes this can be attributed to the test itself. In this case, the term "noise" is used. The overall general term that is used is IBS.

IBS stands for Indentity By State. IBS is a term that refers to the matching of DNA via mere chance and coincidence and NOT common ancestry. In a population of people, two or more people will always match DNA via pure chance.  IBS is what you want to eliminate from a DNA test. All DNA tests have to deal with IBS and take it into account.

IBD stands for Identity By Descent. It refers to DNA inherited via common ancestry. IBD matchings are real and that's what you want to focus on.

Companies such as Family Tree DNA and 23andMe use thresholds to declare a match. The reason for this is so IBS matching can be eliminated. The problem is that at low cMs, there is no clear cut way of knowing what's actually IBS or IBD. A low cM such as 7cM or 8cM could be IBS (non real) or could be IBD (real). What is known, is that the lower the cM amount, the more IBS comes into the picture.

The current thinking and evidence shows that cMs greater than 20cM is definitive of common ancestry. Between 10cM and 20cM is probable common ancestry, and lower than 10cM falls into the range of IBS.